I've just finished reading "Super Volcano: The Ticking Time Bomb Beneath Yellowstone National Park" by Greg Breinin. Despite the hyperbolic title, it's a really good introduction to the subject. Actually, the title is entirely appropriate, since the previous Yellowstone eruption around 600,000 years ago was one thousand times as powerful as the 1980 Mount St. Helens eruption. And it's likely to erupt again, but no one knows when.

We've been on a bit of a volcano tour recently. First we visited Lassen Volcanic National Park in October (climbing the Cinder Cone was a highlight), and we stopped in on Mount St. Helens visitor center on our way to Seattle last month. Yesterday we ventured into the Yellowstone caldera (the bit that blew out in the last eruption).

Before reading the book I hadn't appreciated how recent our understanding of Yellowstone's geology is. It was only in the 1960s that scientists combined new empirical data about the ages of different rock formations in the park with the then emerging theory of plate tectonics. One of the scientists was Robert Christiansen of the U.S. Geological Survey, who, with Richard Blank, collected samples from all over Yellowstone and pieced together the puzzle of how Yellowstone formed. (He also wrote the definitive account of Yellowstone's geology in 2001.)

They realized that the series of calderas between Oregon and Wyoming were all eruptions caused by what is now known as the Yellowstone hotspot over the last 16 million years. The continental plate is moving south west, which makes the newer volcanoes appear in the north east.

This diagram from Wikipedia summarizes it nicely: 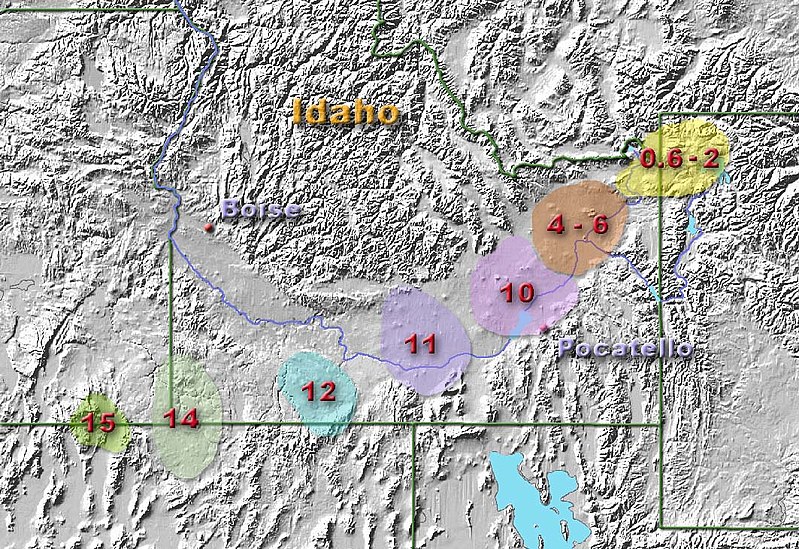