I was diagnosed with Type 1 Diabetes (T1D) in February last year. Since then I have learnt a lot about the condition, and how to manage it. The first few months were quite turbulent, but now it’s become more settled and is a part of life, and thankfully I don’t spend every minute thinking about it. It never goes away though.
In this post I describe the technology I’m using to manage T1D. Every PWD (person with diabetes) is different, so what works for me won’t necessarily work for others. Also, some of these things don’t even work for me all the time, such is the unpredictable nature of diabetes. So there are definitely improvements I could make. I’ll mention some of them at the end of this piece.

The main tools I use are a FreeStyle Libre to measure my blood glucose levels, and insulin pens to administer multiple daily injections (MDI) of insulin. I also use a number of apps and websites to manage the data.

Quite simply, the Libre is a superb piece of technology. It gives an amazing amount of insight into blood glucose levels - you can see what happens after you eat a particular food, or the effect of exercise, and even what happened to your levels during the night. I’ve been using one for over a year, and without it I really think I would be a lot more stressed about BG levels, and probably overcompensating for lows and oblivious to highs.
There are two parts to the Libre system: the sensor and the reader. The sensor is a small white disc that you stick to your upper arm. It has a small needle that sits under the skin where the glucose sensor is located. Each sensor lasts 14 days before it must be changed. The reader is a custom device, like a tiny phone (see picture above), but you can also use your phone to read the sensor using NFC. The sensor only stores 8 hours worth of measurements, so you need to tap the reader on the sensor at least that often to avoid gaps in history.
I use the reader rather than my phone to read the sensor (I only recently upgraded my phone to a version that can read the sensor). The reader can store 90 days of readings, so I periodically download the data as a backup and as a way to run different analyses on it.
Abbott, the company that manufactures the Libre, provides a desktop application to download the data from the Libre over USB. I wrote a script to upload the resulting data to a service called Nightscout.

Nightscout is an open source project created by the #WeAreNotWaiting community to allow people with T1D to store their CGM data in the cloud. It was started as a way for parents of children with T1D to monitor their BG levels (particularly at night, without disturbing them), but it is now widely used by many in the T1D community, and forms a basis for DIY looping systems, like OpenAPS.
I use Nightscout as a historical data store, rather than for its realtime capabilities. I like Nightscout because it's open source and therefore not tied to a corporation (which could pull the service, change its terms, etc), but the downside is that you do have to run your own service, although that’s pretty easy to do on Heroku.
Nightscout provides its own analytics, which are very useful. I also wrote a webpage to provide a weekly summary called dboard that reads data from Nightscout and shows a few key stats (time in range, average BG, estimated HbA1c) for the week, so I can see at a glance how the week was.
Turning to insulin, MDI uses two types of insulin - a basal dose of long-acting insulin (I use Levemir) every night before bed that provides a background supply of insulin over the day, and bolus doses of rapid-acting insulin (I use NovoRapid) taken before every meal or snack and which are adjusted to “cover” the carbs in that meal.
I don’t have an insulin pump. After I was diagnosed I assumed that I would eventually move on to one, since they offer a high degree of blood glucose control. However, my doctor said that since my control was very good using MDI, there wasn’t a strong reason to move to a pump. I'm still on MDI, and it works well for me. I was quite surprised to find that the needles on insulin pens are so fine that you can barely feel them, so injections are not normally painful. Extracting a drop of blood from a finger with a lancet for testing the blood glucose level hurts more.
Interestingly, it’s very likely that I’m still in the “honeymoon phase” of T1D, which is when the body still produces some insulin. This helps with control, and is probably another reason MDI works well for me. The literature on the duration of the honeymoon phase is maddeningly vague, but it’s typically between months and years. (One interesting paper I found suggests that doing regular exercise can prolong the honeymoon. A good reason to keep up the running…)
How do I know how much insulin to take? The nightly basal dose is fixed and the same every day - the dose was arrived at by trial and error soon after diagnosis, and it hasn’t changed much since.
Bolus doses for meals depend on two main variables: the amount of carbohydrate in the meal, and (to a lesser extent) the amount of exercise I’m expecting to do over the following few hours. This is the most fiddly part of managing T1D, since I have to work out the number of carbs in everything I eat. What’s more, I have to try to take my insulin at the right time before eating since injected insulin takes a while to get into the blood stream and become effective. To complicate things, some foods release glucose slowly, others a lot faster.
For carb counting at home where we cook most of our meals from scratch I wrote a web app called Ingreedy that calculates the number of carbs in a meal from its ingredients. This was especially useful in the early days when we had no idea about the carbs in particular foods. I also eat fewer carbs than I used to, around 120g a day.
I'm now better at eyeballing the (rough) number of carbs in food, which I need to do when eating out. If I’m unsure I use the Carbs & Cals app which has photos of foods for different portion sizes and their carb counts.
After getting a carb count I have to convert this into the amount of insulin to take - there is a simple ratio to calculate this (e.g. 15g carbs translates to 1 unit of insulin), but the final amount is adjusted by my current BG reading, insulin already "on board" (i.e. in my body), and any exercise I’m going to do in the next few hours. I have a Google spreadsheet that acts as a food diary and does the calculation for me. Then I manually log the meal entry into Nightscout, so I have a log of number of carbs eaten and insulin taken.
When I was first diagnosed I was told that it’s important not to always inject in the same place, since it can make injections less effective (and also cause damage to the area concerned). So I needed a scheme to rotate injection sites. At first I recorded a note of the site I just used on paper so I could choose the next one by looking at the note, but that quickly became tiresome, so I made a little gadget out of cardboard with a pin that I moved every time I did an injection. I still use that for my nightly basal injections.
For my meal bolus injections I now use a scheme that maps day of week and meal to an injection site on my tummy. This means I rotate through sites once a week, which is fine, and most importantly it’s stateless (i.e. I don’t need to remember where the previous site was). (Writing this prompts me to think about moving  to a similar scheme for my basal injections.) 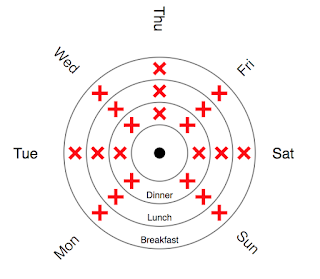 Low blood sugar is an inevitable part of T1D. Sometimes you misjudge the amount of insulin and take too much (the pens I use can only administer whole units, so you have to round up or down to the nearest unit), or you do more exercise than you anticipated, or for some other reason your BG goes lower than you want it to. Although I can feel a hypo coming on, the Libre is a very useful tool for heading them off as I can see how quickly my BG is changing and possibly pre-empt a hypo. (For example, if my BG is a bit lower than expected and I’m going to go out soon I might eat something so I don’t go too low.)
When I’m having a hypo I will take glucose tablets, which I like for two reasons. First, they have a fixed dose (4g of carbs), and second they don’t taste that nice so you aren’t tempted to overdo the glucose and go too high.
I’ll also fall back to measuring BG with a finger prick test since blood generally gives a more accurate and more up-to-date reading than the Libre (which measures glucose from interstitial fluid, and has a 5 to 10 minute delay to changes in BG). I have a spare meter for this, or I use the Libre with a test strip.
It’s easily overlooked, but making sure I have all the supplies I need requires a bit of organization. I thought about building an app that notifies me when I need to order something, but I never got round to it. Instead I have a calendar reminder each week to check supplies and order more of any that are running low. Low tech, but works for me so far.
Finally, there are a few things I’ve been thinking about changing or tweaking slightly.